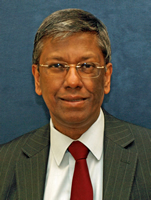 Prof Sun Myint graduated in Rangoon (1972). He was appointed by MRC as a Clinical Scientist in 1983 and became a consultant in 1989. He served on the Council of Association of Coloproctology of Great Britain and Ireland (2006-2009) and the Royal College of Radiologist (2009-2012).

He introduced contact radiotherapy facility into the UK and set up a Papillon unit at Clatterbridge in 1993. He was elected as President of International Contact Radiotherapy Society (ICONE)in Rome(May 2013).