Proton therapy has been provided on this site for over 25 years for the treatment of ocular melanomas. The first two patients were treated in June 1989, making this the first hospital-based proton treatment centre in the world. By the beginning of 2015, over 2625 patients had been treated with protons. The 60-MeV clinical proton beam penetrates to a maximum depth of 31 mm in water, with a remarkable distal fall-off of less than 1 mm, and sharp penumbrae of 1.5 mm. [Figure 1] A library of modulators provides a uniform dose over the depth of the tumour. [Figure 2]

The service was initially commissioned in the Douglas Cyclotron Centre in 1984, under the MRC, to provide fast neutron therapy for randomised patient trials of radio-resistant tumours of the pelvis and head and neck. Eventually, 384 patients were treated with neutron beams, using a gantry, before these treatments ceased in 1995. In 1992, the Douglas Cyclotron became part of The Clatterbridge Cancer Centre (then known as Clatterbridge Centre for Oncology). Since 2013, the proton service has been known as The National Eye Proton Therapy Centre.

Uveal melanomas are quite rare, occurring at a rate of 7 per million per year in a European population. About 450 new cases of ocular melanoma are diagnosed in the UK each year, and in recent years 40% of these patients have been referred for proton-beam radiotherapy. The average age of eye melanoma patients is approximately 65, but the youngest patient that we have treated was 9 years old and the oldest was 92.

Patients are referred by specialist ocular oncology centres based in Liverpool, Glasgow, Sheffield and London. Each centre offers several treatment modalities for uveal melanomas, including enucleation, local resection, laser treatments and radioactive plaque treatment (e.g., ruthenium-106 or iodine-125). The decision on which technique to use is mainly based on the size and position of the tumour, as well as patient preference. The main indications for protons are (a) small posterior tumours (e.g., close to the optic disc), (b) large anterior tumours not suitable for local resection or too high for radioactive (Ru-106) plaque treatment, and (c) iris/ciliary body melanomas, where protons can offer a precise, shallow depth-dose of the order of a few millimetres.

Douglas Cyclotron Centre staff provide support for the EyePlan treatment planning software, which has been distributed to other centres worldwide. [Figure 3] It is the most-used planning software for ocular proton treatments. Following in-house development, we have replaced Polaroid films for patient positioning with the use of moveable digital X-ray panels, in collaboration with ocular proton centres in Europe and North America. [Figure 4] There is a long-standing collaboration with the National Physical Laboratory on proton dosimetry, which has included reference standard graphite calorimetry and proton ionometry. Other groups have investigated detectors such as alanine pills, Gafchromic films and Pressage and BANG gels. Monte-Carlo modelling of the beamline, using several codes, has been carried out in collaboration with the University of Liverpool, NPL, Daresbury and Huddersfield University. Dosimetry intercomparisons with other (non-UK) proton centres take place at regular intervals, using ion chambers, alanine and Faraday cups. The general problem remains of mitigating the “quenching” of the dose response at the Bragg peak, due to the high ionising density of low energy protons. Considerable efforts are now directed to radiobiological effects of proton beams, particularly for radio-resistant tumours. 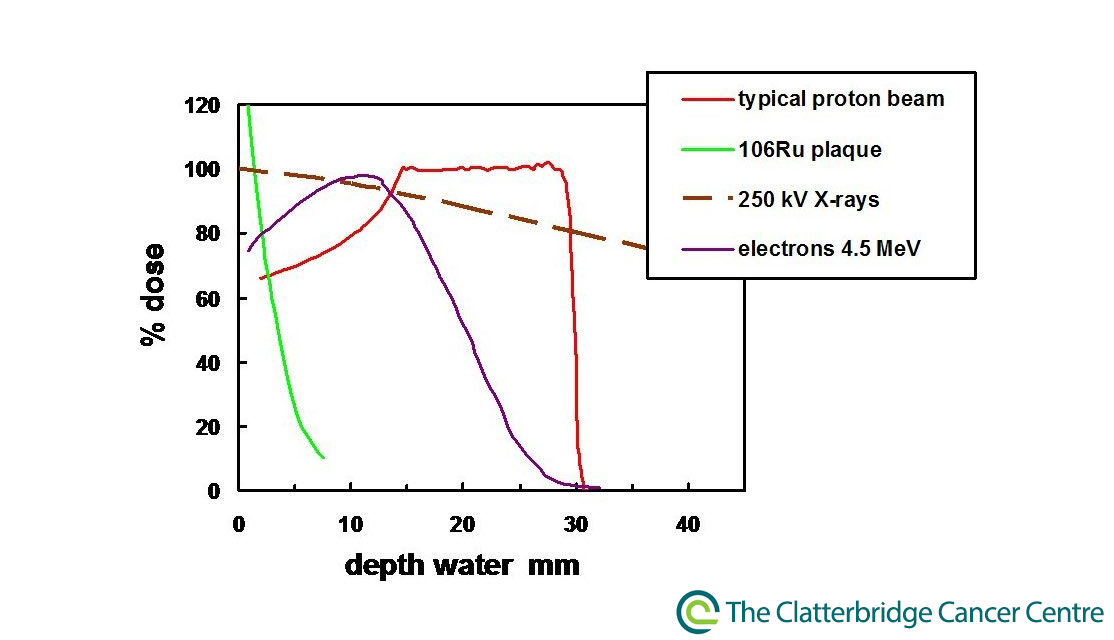 A comparison of central-axis depth-dose curves at shallow depths. The proton depth-dose is a typical patient with a posterior tumour. 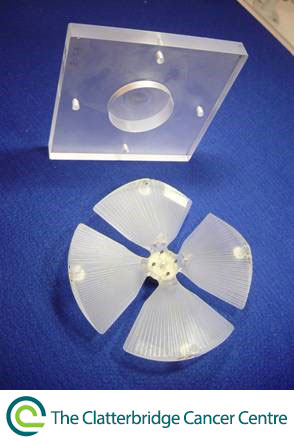 Figure 2. Range shifter and modulator made of PMMA 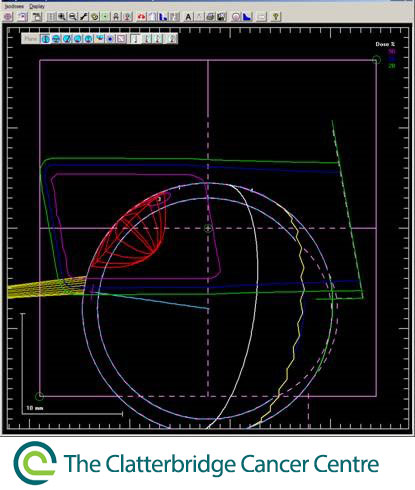 Figure 3. A vertical ‘slice’ of a patient plan with EyePlan 3.07. This shows a typical posterior tumour near the Optic Disc. 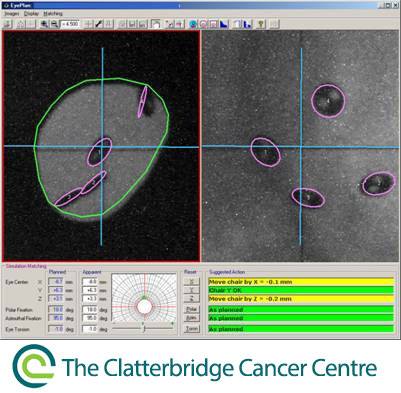 Figure 4. Matching of patient positioning X-ray images with EyePlan. Note the four Ta radio-opaque markers, which were previously sutured onto the eye by the referring ophthalmic surgeon.