A breast cancer patient from Chester who has modelled for top retail brands has celebrated her 100th chemotherapy treatment at local cancer hospital.

Sam McGimpsey, 46, was diagnosed with two different types of secondary breast cancer in 2014 and has been receiving chemotherapy treatment at Cheshire and Merseyside’s specialist cancer hospital, The Clatterbridge Cancer Centre, ever since. After five and a half years of treatment, which has also included a double mastectomy at The Countess of Chester Hospital NHS Foundation Trust, Sam marked her 100th chemotherapy appointment at Clatterbridge Cancer Centre – Wirral.

Surrounded by nurses, many of whom Sam now refers to as friends, and her husband Jason who was granted special visiting permission by the hospital’s Matron under the current Coronavirus (COVID-19) visitor restrictions, Sam rang The Clatterbridge Cancer Centre’s milestone bell. 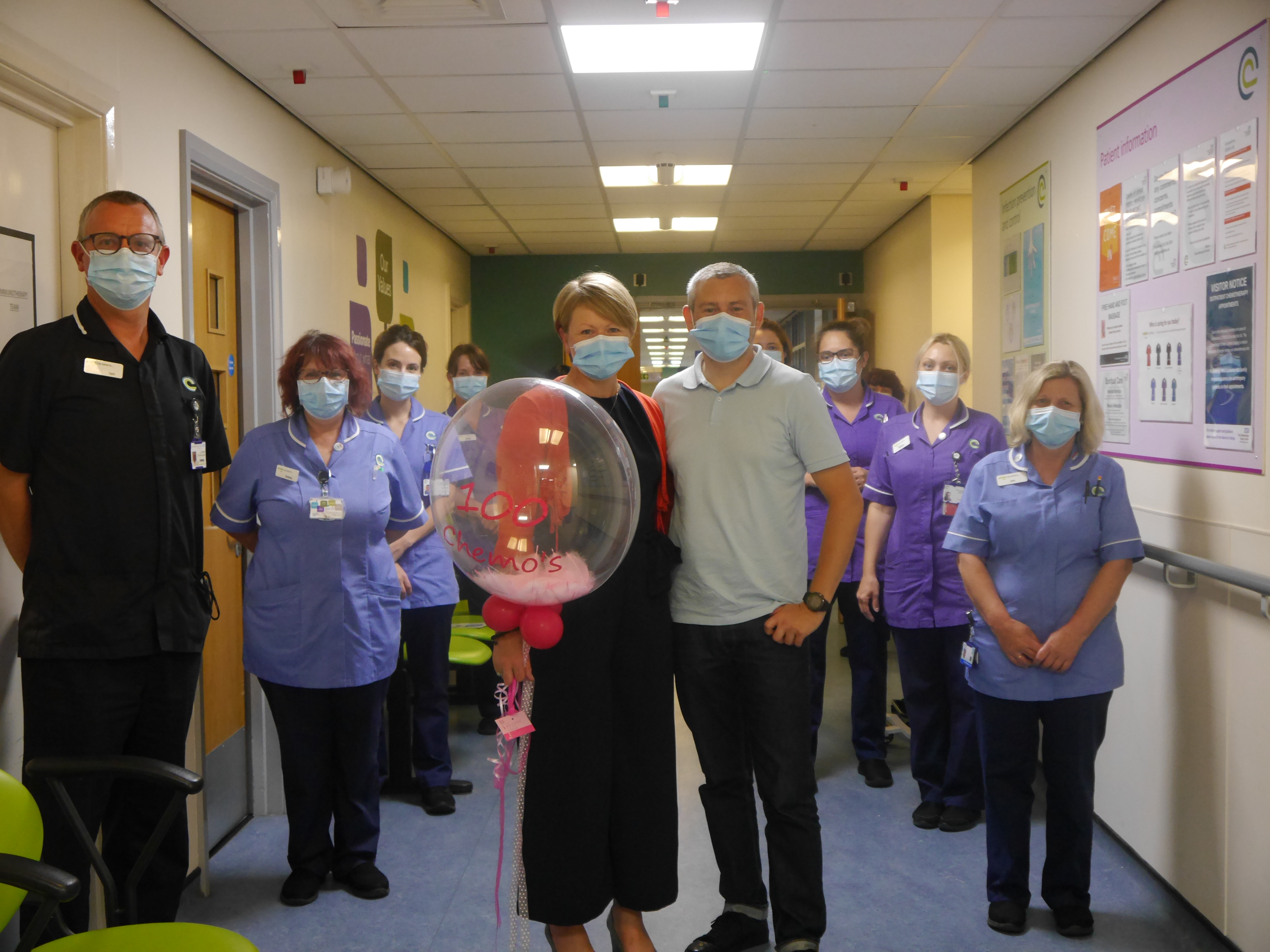 “I’d been thinking about ringing the bell for a good couple of months as I knew it was coming. Because of the visitor restrictions in place at the hospital I wasn’t sure if Jason would be able to be there, so instead I decided I was going to have a party and make some cakes,” explains Sam.

“It was lovely to have so many nurses, old and new, there who came onto the ward to celebrate with me - it was better than a birthday really,” Sam added. “The staff do a wonderful job and my experience at The Clatterbridge Cancer Centre has always been positive. To me it doesn’t feel like a hospital, it’s somewhere I go to get my treatment and say hello to lots of people.” 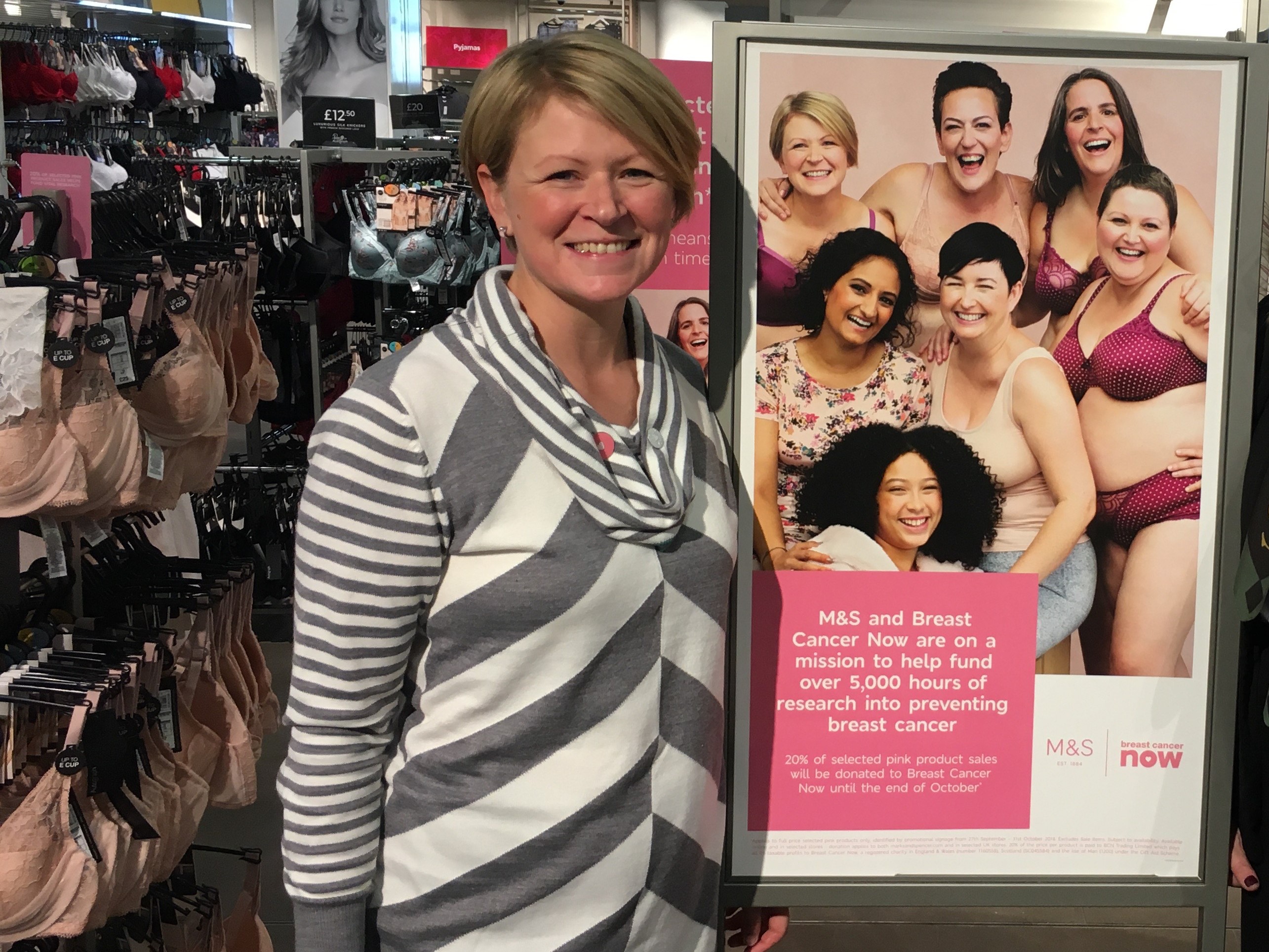 Since her diagnosis, Sam has been raising awareness about the signs and symptoms of breast cancer which has seen her land two different campaign modelling shoots with Debenhams and Marks & Spencer. In a solo-photoshoot Sam modelled post-surgery bras for Debenhams before getting her husband involved in Marks & Spencer’s couples campaign where they met friends for life who have also been affected by breast cancer.

“Jason has been my absolute rock throughout everything and has been there every step of the way. We don’t sweat the small stuff and try not to worry about what we can’t control, focusing only on what we can.”

Sam’s campaigning has also seen her work with a national breast cancer charity to reduce the price of the chemotherapy drug Kadcyla in order for it to remain routinely available on the NHS in England. Having successfully achieved this, Sam has been able to continue receiving Kadcyla chemotherapy treatment since she started on it in September 2015 following her initial chemotherapy and surgery.

“My body has done an exceptional job, keeping me stable for so long, and my tumours have responded well to the treatment. You’ve got to have luck on your side. You can say it’s unlucky to be diagnosed with two different secondary breast cancers at the same time, but if I hadn’t have had the inflammatory breast cancer in my left breast which was presenting as blotches under my skin, itching and general discomfort then I wouldn’t have been alerted to go to the GP because the lump in my right breast from the tumour was undetectable by touch alone. It is very important to get any changes checked immediately because early detection can save life.”

The milestone poem was written by palliative breast cancer patient Jane Brady, 54, from Frodsham for patients like herself and Sam who may never finish treatment and get to ring the end of treatment bell in the traditional way. Jane’s poem is now displayed next to the end of treatment bell at The Clatterbridge Cancer Centre’s sites and patients are encouraged to read it aloud and ring the bell at whatever point in their treatment pathway they would like, whether that be to give them courage before their first ever chemotherapy session or perhaps after a particularly hard week of feeling unwell. 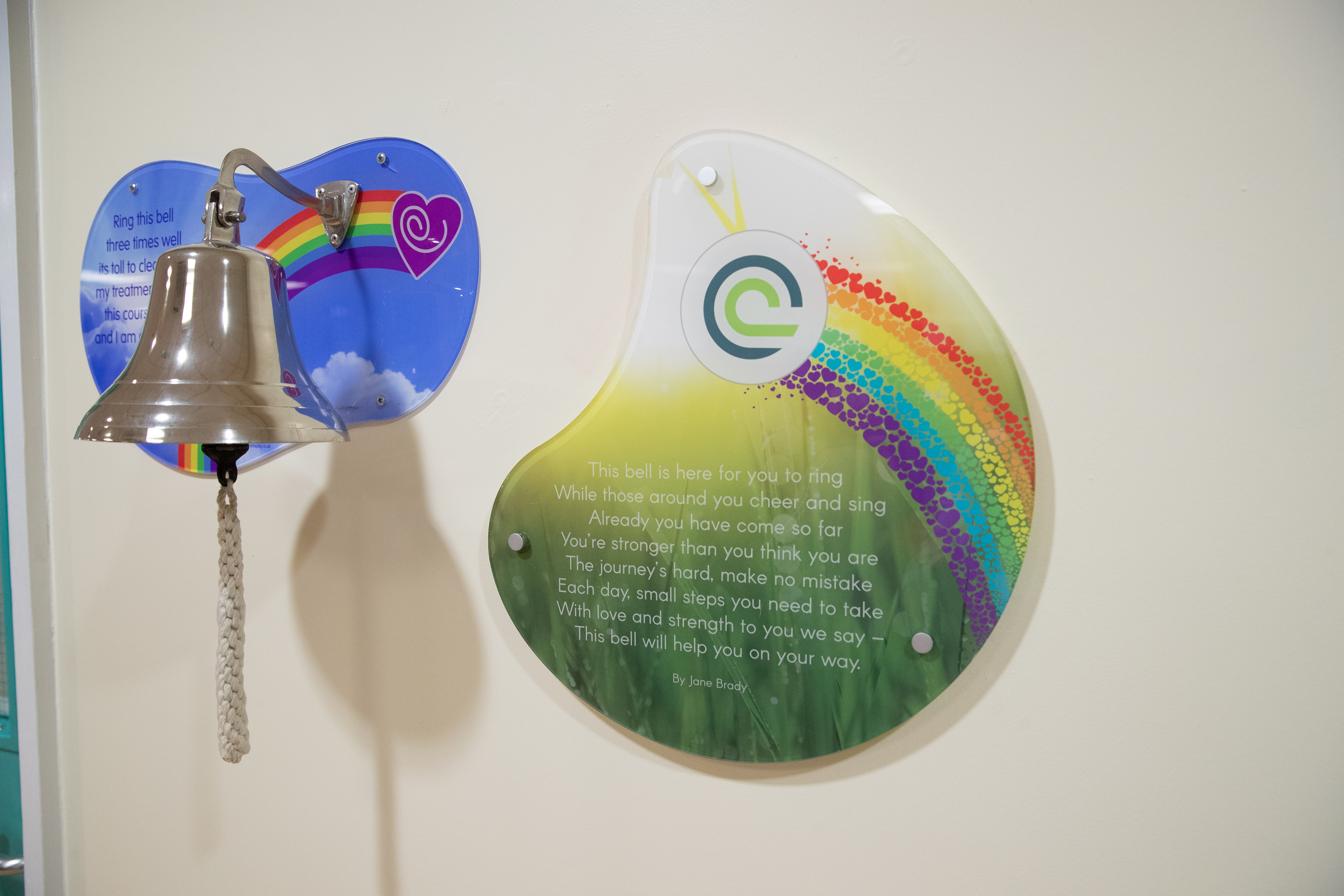 Meet our volunteers: Hello my name is… Rachael
​Blood cancer wards open at region’s specialist new can...
« Return to News