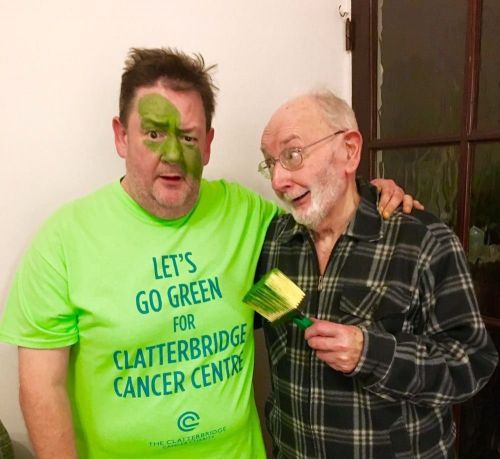 Comedian Johnny Vegas is going green for The Clatterbridge Cancer Centre – and wants as many people as possible to join in the fundraising fun.

The Still Open All Hours and Benidorm star is leading the way in turning green as part of a £15 million Appeal to help build Liverpool’s first specialist cancer hospital.

Johnny said: "When you hear the word cancer it takes you to a place you don't want to go to but we are so lucky to have The Clatterbridge Cancer Centre on our doorstep.

“I'm hoping everyone gets behind this campaign to raise £15million for a brand new cancer hospital in Liverpool and it all starts by Going Green for Clatterbridge from 4-12 February."

The new hospital in Liverpool is being built as part of a £157million plan to transform cancer care which will also see £8million will be invested in The Clatterbridge Cancer Centre in Wirral.

We are asking people to get involved by going green, in any way they can.

Schools might want to hold a green day where pupils pay £1 to dress in the colour for the day or bake green cakes.

Businesses can do the same, or workers could also tip green gunge on their boss – for the price of a generous donation of course.

Let’s Go Green for Clatterbridge will see dozens of buildings and structures going green in support of the New Hospital Appeal from 6th February. They include civic landmarks like Liverpool Town Hall, The Central Library, The Cunard Building on the banks of the River Mersey, Wallasey Town Hall, Eastgate Clock in Chester, and the Greystone Footbridge over the M62 motorway.

Cancer patients from the Isle of Man travel to The Clatterbridge Cancer Centre for treatment and the island will mark the launch of the Appeal in style by lighting up the Tower Refuge and Power Station in Green.

We are inviting many more businesses and local authorities to get involved by turning their buildings green to support the fundraising drive.

We will be encouraging people to tweet their support using the hash tag #letsgogreen and posting pictures of themselves wearing green, sporting green wigs or even joining Johnny Vegas in a spot of face painting.

Katrina Bury Head of The Clatterbridge Cancer Charity said: “One in two of us will develop cancer over our lifetime so this new hospital is vitally important for the people of Merseyside and Cheshire.

“We are only going to get one chance in our lifetime to build a brand new facility like this, which will transform cancer care for generations to come. We hope everyone will get behind us by going green and help to build a cancer hospital that we can all be proud of.”