How man’s best friend supported me through cancer treatment

For dog lovers, exploring the great outdoors is one of the benefits of owning a furry companion. But for Mike Taylor, taking his beloved dog Bobbi for walks has been more than a hobby. It’s been a life saver.

“I’d been feeling really unwell on a recent holiday and lost a lot of weight” explained 56 year old Mike from Broadgreen.

In October 2018, Mike, who has worked as an Operating Department Practitioner at Broadgreen Hospital in Liverpool for 25 years, was diagnosed with a rare form of blood cancer called Hairy Cell leukaemia, so called because of the appearance of the abnormal cells under a microscope.

“It was a devastating blow for me, my wife Debbie and our son Alex, 22. But I’m very level headed. I knew we had to deal with it and tackle the problem head on.” 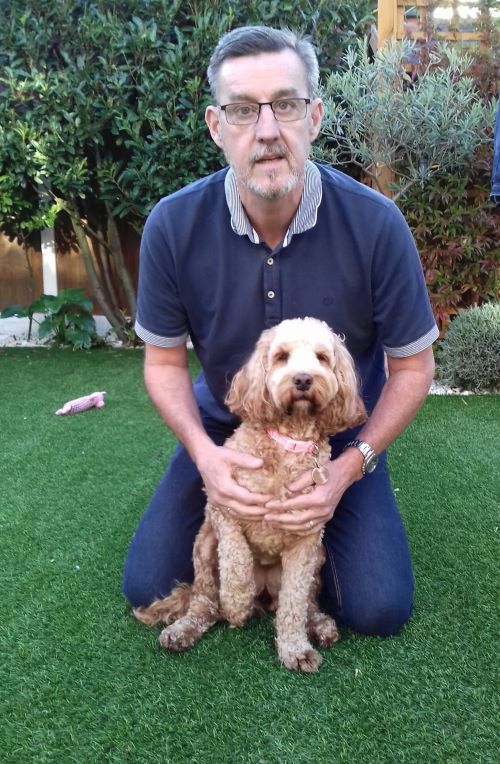 Mike’s treatment took place at The Clatterbridge Cancer Centre’s heamato-onoclogy ward at The Royal Liverpool Hospital. “From day one, the care and the service from every single one of the staff was outstanding. My speciality nurse Lauren and everyone in the team are the most amazing people.

“When you’re diagnosed with cancer, it’s such a bolt out of the blue. The team from Clatterbridge were always there on the end of the phone to reassure me, no matter the hour of the day.”

As well as his family and medical team standing by him, throughout his treatment, Mike had the support of the family’s cockapoo, Bobbi who they welcomed into the family just one year before his diagnosis.

“During my treatment, I couldn’t go to crowded areas like football stadiums or cinemas because of the risk of infection with my lowered immune system. So taking Bobbi for long walks is open parks and fields was what kept me going.

“Bobbi would always know when I wasn’t right and needed to get some fresh air. She would force me out of the house to play in the fields with a ball, kept me active and stopped me from sitting around feeling sorry for myself. She was a massive part of my recovery.”

Mike is now in remission from leaukemia and is enjoying life to its fullest again. “I’m back working again but definitely trying to take it easier and taking more time for myself. Debbie and I are planning lots more holidays, as well letting Bobbi run rings around us in the local park!”

On Sunday 22nd September, to show their support for The Clatterbridge Cancer Centre, Mike, Debbie and Bobbi will be taking part in Lead The Way, a sponsored dog walk to raise money to support cancer patients from Cheshire and Merseyside. “We’re so grateful for the support that was shown to us when I was a patient, this is our small way of giving something back. Bobbi was a huge part of my recovery and keeping me upbeat, so to bring her along with us and have her involved in the day will be very special.”

Patient recruited to clinical trial is the first in the world f...
​Trust to open major new cancer hospital in Liverpool as NHS...
« Return to News