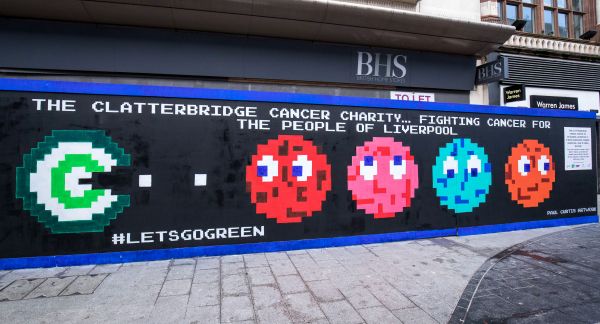 The Clatterbridge Cancer Charity has unveiled a striking mural by renowned local artist Paul Curtis to mark the start of Let’s Go Green 2018.

The annual fundraising week has been given a presence in Liverpool city centre at the site of the old BHS department store.

The mural shows the distinctive three C logo of the charity fighting off cancer cells in a modern artwork that will stop shoppers in their stride as they make their way along Lord Street.

Curtis, who made his name with the famous wings street art in Liverpool’s Baltic Quarter, came up with the idea when he was commissioned by the charity last year.

He spent four days working in freezing temperatures to bring the idea to life for the fundraising campaign to help build Liverpool’s first specialist cancer hospital.

Katrina Bury, Head of the Clatterbridge Cancer Charity, said: “We were thrilled when Paul agreed to work with us for this year’s campaign. He is one of the most exciting artistic talents in Merseyside and his idea is eye catching and impactful.

“One in two people in Merseyside will develop cancer in their lifetime and we hope this mural will help remind people why it is so important that this hospital is built to help transform cancer care in the region.

“We would also like to thank building consultancy GIA, main contractor Graham Construction and managing agents Mason Owen for helping us bring this mural to life.”

Paul Curtis said: “When The Clatterbridge Cancer Charity asked me to work with them on their fundraising campaign this year I was very happy to get involved. It is a great cause and if I can help make people stop and think about cancer and the new hospital through my work then that can only be a good thing.”

Let’s Go Green for The Clatterbridge Cancer Charity takes place from 3rd-11th February and there are lots of ways you can get involved.

Schools might want to hold a green day where pupils pay £1 to dress in green for the day, or bake green cakes. Businesses can do the same, or workers could tip green gunge on their boss – for the price of a generous donation of course.

Landmark buildings in the region will be turning green to mark the occasion, including Liverpool Town Hall and the Cunard Building, Chester’s Eastgate Clock, Wallasey and Birkenhead Town Halls and The Greystone Bridge over the M62 motorway. Even a few famous statues have been modelling a touch of green for the occasion.

One of the most impressive sites will be the lighting green of the massive crane at the site of the new Clatterbridge Cancer Centre in West Derby Street.

On 3rd and 10th February, our volunteers will be in Liverpool city centre carrying out a bucket collection. Street collections will also take place in Birkenhead and Heswall on 9th February. 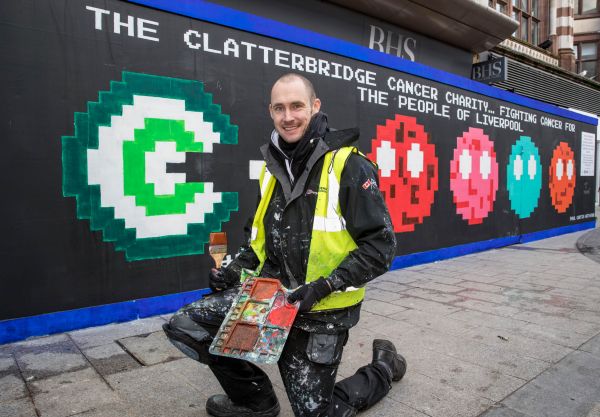